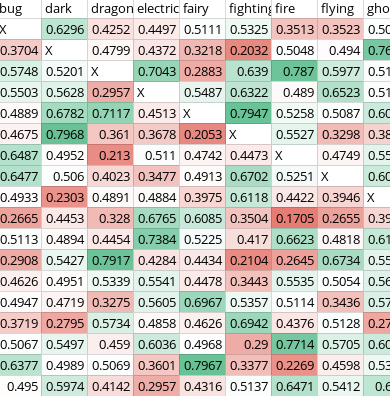 For those unfamiliar with the finer details of competitive Pokemon, it’s basically just a fancy version of rock, paper, scissors. While RPS gives each player 3 options, a turn in pokemon consists of around 4-9 possibilities for each player. Each player then reveals his or her choice simultaneously, and the results of their actions play out. This makes it different than games like Tic Tac Toe, Chess, or Go where only one player is “in control” at a time, and instead more like a game of Poker where two players are forced to reveal their hands at the same time.

While the previous class related post was on the first project of CS61A, this is skipping straight to the second project of CS61B. There were 4 or 5 projects in between the two, but my main problem with them was that for the most part they were nothing more than fancy fill in the blank exercises. This project changed up that format by giving a ton of freedom to the students in terms of implementation.

A fully functioning “Roguelike” game including: